Please note due to serious health issues
blog posts and social media will be irregular for the early part of 2016.
I'd like to thank my clients, my empoyer ENSafrica,
my colleagues and professional associates,
and my family and friends for the continued support
and encouragement during this time.
I look forward to soon returning at full strength.
***
A new monthly article will be published in March 2016
*** 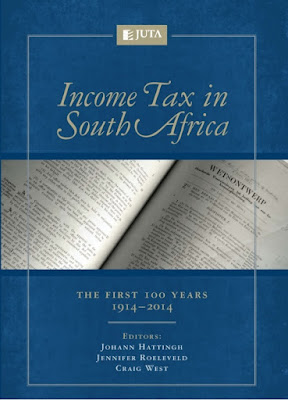 In 2014, twenty years since South Africa became a constitutional democracy,
the University of Cape Town marked this milestone with
the "INCOME TAX IN SOUTH AFRICA: THE FIRST 100 YEARS 1914 – 2014" conference.
I was privileged to be part of this special occasion
and presented a paper called
"The shift to a constitutional democracy in 1994 and the impact thereof on tax law in SA."
This paper (see Part 6: Constitutional, policy and gender issues),
together with all the other conference papers,
has now been published by Juta Law.
You can buy your copy here - further information below.

This book, marking the 2014 centenary of income tax in South Africa, presents historical research covering a range of topics.

The authors begin with the international origins of income tax law and the transformation of old Dutch taxes into colonial income tax, and the role of General Smuts in the introduction of income tax in 1914.

The struggle to find an appropriate means of taxing corporate profits of shareholders is shown to have continued for decades, and mining and farming as main industry players in the South African economy receive special attention. The demise of cooperatives, the history of international tax treaties and the colonial influence also form part of the historical journey of this publication.

An examination of the special qualities of leading judges of the time and their jurisprudence provides much food for thought. Policy debates such as whether South Africa should follow the source or the residence system of taxation, or introduce a land tax, rage today as they did in 1914.

The impact of transformation since 1994, the need to entrench taxpayers’ rights and to remove gender inequality, and the remarkable modernisation of SARS, all played an important part in the development of the South African tax system.

A book about one hundred years of income tax would not be complete without some biographical notes on key personalities such as CJ Ingram KC, Aubrey Silke and David Meyerowitz SC. In recognising the conference held at the University of Cape Town to mark one hundred years of income tax in South Africa, the rise of the teaching of tax at UCT is presented in the form of an extract from the memoirs of Prof Leon Kritzinger.

“I congratulate the authors and editors for their work in this book. Not only will it be the standard reference on the development of income tax in South Africa, but also, for those interested in tax as a vital social and economic issue, it provides entertaining, informative and enlightening reading.’’ – Richard Vann, Challis Professor of Law, University of Sydney
Contents include:

You can buy your copy from Juta Law here

Posted by Beric Croome at 13:12 No comments:

Below is the first review of Tax Administration Second Edition: 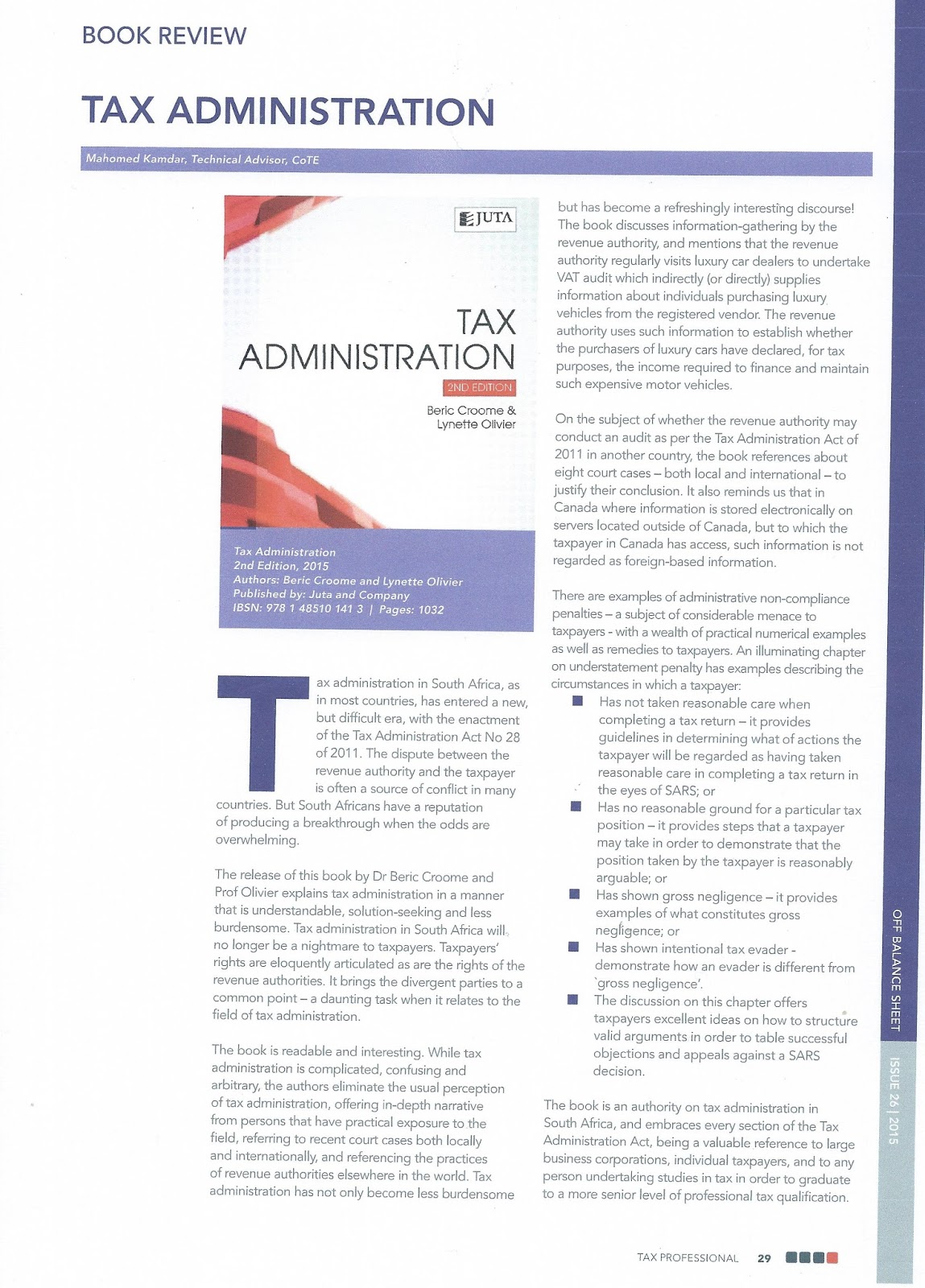 Posted by Beric Croome at 13:40 No comments: