IMPORTANT NOTICE:
These changes must be read together with my primary article on the Special VDP  (Updated 1/2/2017)
Click on this link to read

On 26 October 2016 the Minister of Finance tabled the Rates and Monetary Amounts and Amendment of Revenue Laws Bill, Bill 19 of 2016 in Parliament when he introduced the so-called Mini Budget. This Bill contains the legislation regulating the Special Voluntary Disclosure Programme (“SVDP”) which commenced on 1 October 2016 and was to end on 30 June 2017. The Bill, as tabled confirms that the SVDP will run for nine months as opposed to the originally announced period of six months. Subsequently, on 24 November 2016, the Finance Standing Committee extended the deadline to 31 August 2017.

Under the SVDP, qualifying applicants must include in their 2015 tax income an amount equal to 40 per cent of the highest amount of the Rand value of the unauthorised foreign assets at the end of each year of assessment ending on or after 1 March 2010 but not ending on or after 1 March 2015. Thus, the Bill gives effect to the Treasury’s announcement in September that the inclusion rate has been reduced from 50 per cent to 40 per cent.

In addition, the Bill contains a provision whereby the base cost of the unauthorised foreign assets for which an application is lodged under the SVDP will be deemed to have been acquired on 28 February 2015 a cost equal to the highest market value, in foreign currency, of that asset as determined under clause 16 of the Bill. Clause 16 refers to the manner in which the amount to be included in the applicant’s taxable income in 2015 is to be determined.

Where, for example an applicant seeks relief under the SVDP in respect of unauthorised foreign assets held by a deceased relative on which estate duty was not paid the estate duty that should have been paid by the deceased effectively falls away.

Similarly, where an applicant donated assets to a foreign trust on which donations tax should have been paid that donations tax is effectively waived where the donor makes the election available under the SVDP legislation to treat the assets owned by the foreign trust as belonging to them for income tax and estate duty purposes.

In such a case the income that should have been attributed in favour of the applicant will not be liable to tax but the applicant can apply for SVDP relief on the basis that 40 per cent of the highest market value of the controlled foreign company at the end of 2011 – 2015 tax years must be included in the applicant’s income in the 2015 year of assessment.


The SVDP legislation was promulgated in the Government Gazette on 19 January 2017. Prospective applicants must collate the information required to apply for SVDP relief and start submitting applications to the South African Revenue Service (“SARS”) and the South African Reserve Bank (“SARB”) on the basis that applications for SVDP relief must be submitted via the SARS e-filing system, both for tax and exchange control purposes.

It is important that applicants start obtaining the required information as the timeframe to submit application is short, namely  from 1 October 2016 to 31 August 2017.

The Tax Administration Act (“TAA”) no 28 of 2011 created the office of the Tax Ombud as an office to deal with complaints by taxpayers which SARS has failed to resolve.

The Tax Ombud, namely, Judge B. Ngoepe took office in October 2013 and recently released his annual report for 2015/16. From a review of that report it is clear that the number of complaints made by taxpayers to the office is increasing which indicates that taxpayers are becoming aware of the existence of the office and its purpose.

Furthermore, the Tax Ombud has identified challenges facing its office regarding the fact that the office cannot employ its own staff directly and can only do so in consultation with SARS. The Tax Ombud made representations that the TAA should be amended to allow for his office to employ staff directly without having to consult SARS.

The proposals to enhance the independence of the office of the Tax Ombud are contained in the tax bills to be tabled in parliament on 26 October.

A further difficulty facing the office of the Tax Ombud is that SARS has failed to update the SARS Service Charter which was last done in 2009. The Tax Ombud’s annual report indicates that the office provided SARS with a draft Taxpayer Bill of Rights for consideration. The Commissioner for SARS indicated recently that an updated taxpayer’s service charter would be released before the end of 2016 and that taxpayers would be able to submit comments before the documents is finalised and adopted.

Taxpayers must remember that the mission of the office of the Tax Ombud is to be an efficient, independent, impartial and fair redress channel for taxpayers who have had complaints against SARS which have not been satisfactorily resolved.

A summary of the contacts received by the office of the Tax Ombud is set out below.

From the table set out above, it would appear that out of the 5904 contacts received from taxpayers just under 1000 of complaints received fell within the mandate of the office. During the presentation of the Tax Ombud’s annual report for 2015/16 it was indicated that 87% of all complaints where resolved in favour of taxpayers. Complaints received by taxpayers related predominantly in respect of assessments, dispute resolution, refunds and account maintenance and a host of other issues.

Complaints were received from taxpayers both in South Africa and those outside of the country.

64% of all complaints accepted by the office were service related, with 21% being procedural in nature and 15% administrative in nature. In 2014/15 the office only accepted 409 complaints and this increased to 961 in 2015/16. The annual report contains a summary of the types of complaints received by the office from taxpayers and the time period for which those complaints have been outstanding with SARS.

It is unacceptable that so many complaints remain outstanding for an extended period of time which would indicate that SARS does not appear to take the resolution of taxpayers’s complaints seriously.

This does not enhance tax compliance as international research has shown that where taxpayers believe they have been treated fairly compliance levels are enhanced.

There were many complaints from taxpayers regarding the delays in payment of refunds which unfortunately continues to be a problem nationally and this has received ongoing coverage in the media. It remains to be seen if the office of the Tax Ombud will regard the delay in finalising refunds as a systemic issue which he will investigate of his own accord to understand the reasons therefore.

Other complaints identified related to:
·         Delays in issuing tax clearance certificates;
·         Incorrect allocation of payments made by SARS;
·         Victims of identity theft;
·         Non-adherence by SARS to dispute resolution timeframes;
·         Failure by SARS to respond to requests for reasons for assessments;
·         SARS taking collection steps when legally barred from doing so;
·         Hijacking of e-filing profiles.

It is hoped that the Taxpayer’s Service Charter will be released by the end of the year so the taxpayers know and understand what levels of service they can expect in their dealings of SARS.

Furthermore, it is important that SARS attends to taxpayers complaints timeously and that in subsequent Ombud’s annual reports, the turnaround time for complaints resolution by SARS will improve.

My article on the special Voluntary Disclosure Programme.
This article first appeared in European Tax Service, published by Bloomberg BNA,
October 2016, volume 18, issue 10. #VDP www.bna.com.
You can subscribe to Bloombergs on-line magazine at www.bna.com.
Here is the article: 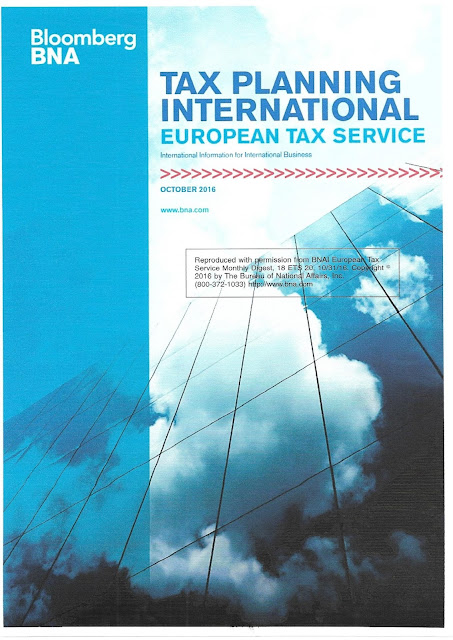 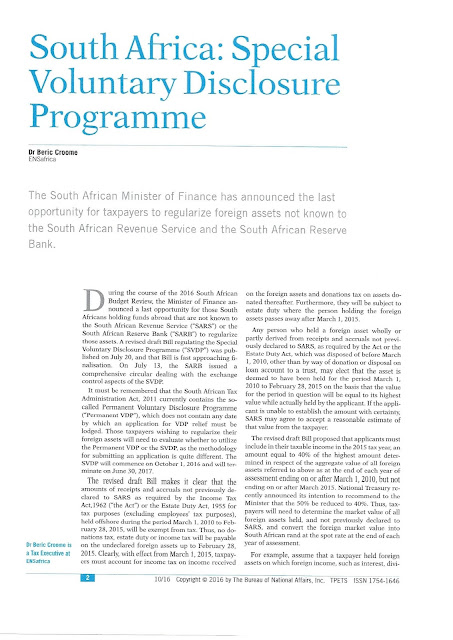 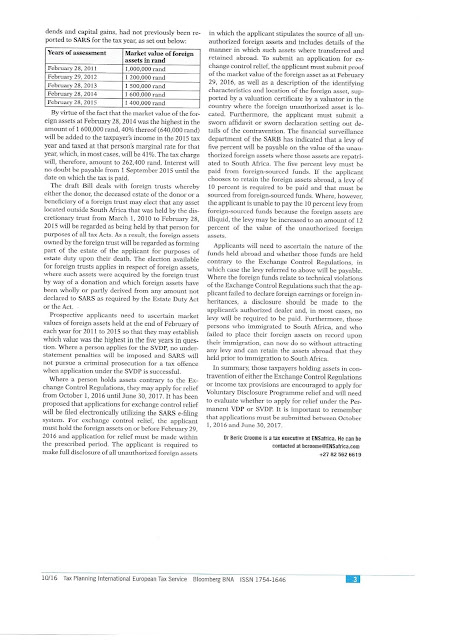 Posted by Beric Croome at 09:18 No comments: